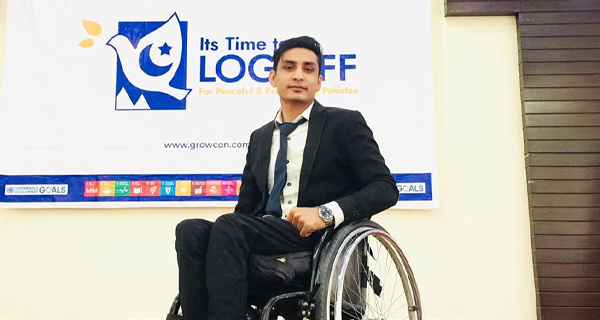 21 years old M.Akmal Khan was born in Zaida, Swabi. One day he was playing in the courtyard that an aerial fire hit him in the backbone and caused him incomplete spinal cord injury. He was 6 by that time. His parents took him to hospital and his back was operated 5 times in 2 months and thus this injury shaped him paralyzed for lifetime. This tragedy changed his lifestyle.

Akmal did not stay at home, he started getting education. He attended certain trainings of using wheelchair. He participated for the very first time in games held in Abbottabad and won 1st prize in wheelchair race. Moreover, he participated in few other games like wheelchair cricket and badminton.

He worked as a volunteer with many Organizations and organized different events. He worked as General Secretory in one of the organizations, who works for the well-being of persons with disabilities and orphans. As his passion is photography, he has covered many events such as cultural nights, wedding shoots and sports festivals.

In 2019, he came to Association for Rehabilitation of the Physically Disabled (ARPD) for job. To see Akmal’s efforts and achievements, Ms. Anjum Anwar hired him as photographer in ARPD. Now, he is working as Photographer and Media Coordinator at RCPD Peshawar. He is an independent person and earning his living with dignity.

Akmal believes that your happiness and success lies in you, make yourself unique among people with abilities by doing work hard. He wants people to convert their disabilities into abilities. He says that disable doesn’t mean that you are not able of doing something but it is just that you are physically facing some problems. You just need to have strength and faith in yourself.