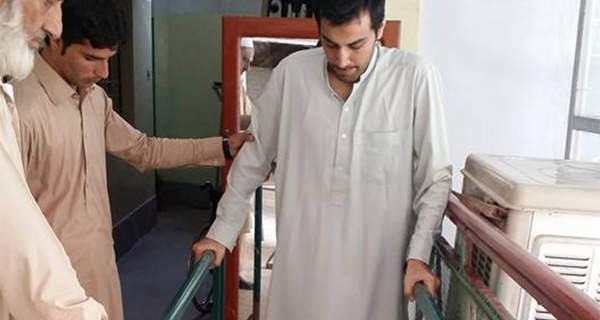 Twenty-Five years old Khalid Wali very depressed and disappointed when he was brought to RCPD. He had visited many places to seek help for his ailment but no results. At RCPD he was diagnosed with GBS (Guillain-Bare Syndrome) by physiotherapy team.

His upper and lower limb muscles were weak. Due to that weakness, he was not able to stand and walk. The RCPD’s physiotherapy team worked hard on his muscle improvement, coordination and balance with the support of parallel bar. AFO (Ankle-Foot Orthosis) was made for him. He has been using parallel Bar, Walker, and Auxiliary crutches to strengthen his muscles.

After three months of successful treatment, he became able to stand and walk with the help of elbow crutches. He is very pleased and satisfied with his recovery.