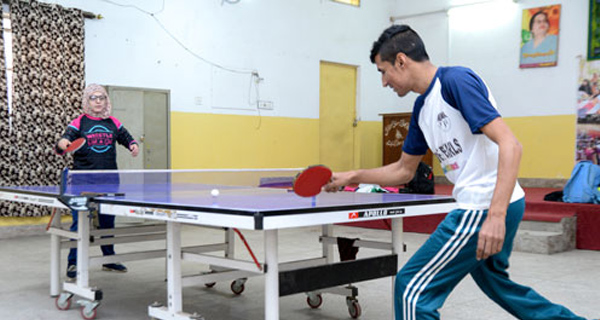 We all face the worst times in life where life might come to an end. The fight to move on depends on us as it is our life and no one else will be there to fix everything. Several times it is required to feel that energy inside which will make us recover from our pains of failure. Among those highly inspirational people, a legend is known who achieved greatness through his efforts that are not so easy to overcome.

Abdullah Jan is a 20-year-old boy, belongs to Peshawar. He encountered one of his greatest life-challenge when he was diagnosed with Polio at the age of 10 months.

Abdullah was determined to cautiously utilize the opportunity given to him. So, he trained vigorously well by the trainers and proved himself worthy. His aptitudes in Table Tennis made him a conspicuous player. At the age of 13, he first appeared in National Paralympic Games and grabbed a Gold Medal. After that gold, he never looked back. He has remained champion of Table Tennis for the last five years consecutively. He also won Khyber Pakhtunkhwa Table Tennis Champion 6 times.

Currently, Abdullah is the Sports Ambassador of ARPD & HHCS. He also provides training to other Table Tennis players with disabilities at RCPD Peshawar. Abdullah is a true Champ and living example for all people.

Abdullah says “Giving up is always easy but getting up from the injuries of your failure is what makes you a capable person. Never miss your basics in no matter what you do and you will surely succeed in your life”.

His success story speaks of his gaining of the ultimate knowledge from his career. And that is why he is considered a legend. What Abdullah can teach us is never giving up. He never surrendered in his career. He failed multiple times but in the act, he always encompassed those failures as a lesson. Victory is inevitable only if you are never losing your hopes.